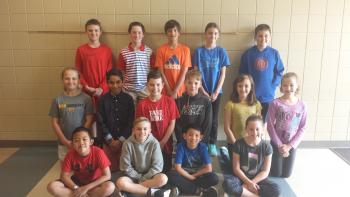 The 5th/6th Grade America Answers National Contest took place April 19 and 20. The contest is open to 5th and 6th graders all across the United States and there were 184 5th and 6th-grade teams competing, 89 of which were 5th-grade teams. The quiz is a self-scoring, computer contest of 100 multiple-choice questions. Areas covered include math, geography, government, sports, spelling, science, literature, English, history, general information and just plain fun trivia. Team members watch the Promethean board while one team member enters the team’s answers into the computer. Points are awarded based on speed and accuracy. Teams get two chances for each question to answer correctly. No adult assistance is allowed! The first and second place teams are awarded individual ribbons and a school trophy.