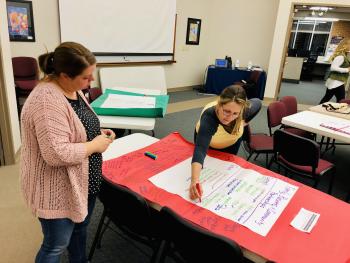 Leslie Wessel doesn’t know what career her first-grade son will someday pursue, but she’s confident of one thing.

“I know my son is going to do a job that doesn’t exist yet,” the Andover mother says. “And it’s going to take a lot of creativity to help him figure out how to do it.”

Wessel, a Realtor and member of the Wichita-area Business and Education Alliance, is convinced that the current model of education in our state — which was developed around the farm and factory work days of 100 years ago — isn’t going to teach her son the creativity and other “soft skills” necessary to succeed in today’s workforce.

She’s an advocate for the Kansans Can School Redesign Project, a statewide effort to re-think what education should look like in the 21st century. Four Andover schools — Cottonwood, Robert Martin and Meadowlark elementaries, and Andover Central Middle School — are participating in the redesign process this year. Eventually, every school in Kansas will undergo a redesign.

The Kansas State Department of Education identifies several factors in explaining why schools need to adapt to our changing times:

For parents and educators, the “why” of school redesign is often more personal.

Alicia Moss, a fifth-grade teacher at Meadowlark Elementary, says for her, redesign is about ensuring school is as valuable as possible to each individual child.

“We need to meet the needs of every single student,” she says. “I want to make sure our children are beyond successful — they are passionate about something.”

“We want to make school as personalized as possible,” she says. “We want to let kids explore their passions and figure out what they love.”

Rogers stresses that schools will still be teaching to the state’s education standards. But the delivery will look different and may include more projects, more interdisciplinary learning and more fluid class schedules.

“We’re doing a lot of things well,” she says. “We want to make it better. This is our chance to dream big.”