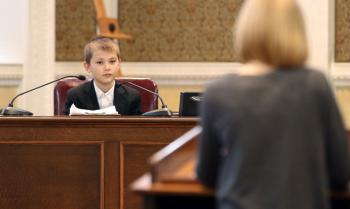 Fourth-graders at Sunflower Elementary had a once-in-a-lifetime opportunity recently to perform mock trials at the federal courthouse in Wichita.

The students were told this was the first time the courthouse had been opened up to students for this purpose.

The trials were part of the students’ government unit. Students performed the roles of a typical trial.