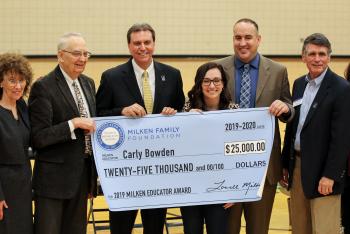 An outstanding math teacher at Andover Central Middle School has been awarded one of the rarest prizes in education.

Carly Bowden was honored Thursday with a Milken Educator Award, given to 45 educators in the nation annually and often referred to as the “Oscars of education.”

Kansas joined the Milken Educator program in 1992, and Bowden is the 67th Kansan to be named a Milken Educator. More than $1.6 million has been awarded in Kansas since the program began.

“Carly represents the exceptional educators here in Kansas,” said Kansas Commissioner of Education Dr. Randy Watson. “Her ability to engage her students in meaningful, personalized learning is what every educator should aspire to achieve. I want to congratulate her on being named a Milken Educator. I also want to thank the Milken Family Foundation for giving us the opportunity to recognize Kansas’ outstanding teachers.”

Bowden, who is in her fifth year in Andover, is the first Andover educator to receive a Milken Educator Award. She is known for her ability to adapt her lessons to various levels while making math fun.

Some of her interactive lessons include:

“Regardless of a student’s ability, Carly makes students feel successful, valued and like they are the most important asset to the success of her classroom,” said Tim Hayden, ACMS principal. “Her ability to establish positive relationships with students, accompanied by a unique ability to engage students in real-world applications of math, is simply amazing.”

Bowden is a former recipient of the Horizon Award, which honors exemplary Kansas educators in their second year of teaching; a Bright Red Apple Award winner, which honors Andover Public Schools teachers in their first three years in the profession; a Golden Apple Award winner, which honors Andover teachers with four or more years in the profession; a mentor to new teachers; a leader in school redesign; and a presenter at educational conferences.

“Andover Public Schools is so appreciative of the Milken Family Foundation for awarding Andover Central Middle School seventh-grade math teacher Carly Bowden the Milken Educator Award,” said Brett White, superintendent of Andover Public Schools. “Carly is an exemplary educator who inspires her students to love math. She engages them in hands-on lessons that are relevant and meaningful to their lives. Students appreciate the creativity that Carly shows and the thorough manner in which she teaches concepts. Carly builds outstanding relationships with students, and truly makes a difference in their lives.”

The Milken Award recognizes exemplary elementary and secondary school teachers, principals and specialists who are furthering excellence in education. The award alternates yearly between elementary and secondary educators. Since its inception in 1987, the Milken Educator Awards have recognized more than 2,800 educators with awards totaling $70 million. The Milken Family Foundation, headquartered in Santa Monica, California, has directed more than $140 million to the initiative, including awards and professional development opportunities.

In addition to receiving $25,000, Bowden also will become a member of the National Milken Educator Network, a group of more than 2,800 distinguished educators and leaders from across the country. She also is invited to attend a Milken Educator Forum in Indianapolis from March 26-28, 2020, where 2019-2020 recipients will network with colleagues and exchange ideas with state and federal leaders on the future of education.