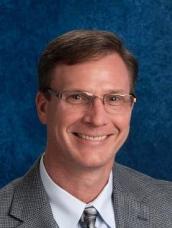 USD 385 Board of Education announced today it has reached a tentative agreement with its new superintendent. Brett White, USD 385 Assistant Superintendent, has been promoted to replace Greg Rasmussen, who will retire at the end of the current school year effective July, 2017.

“The Board carefully considered the leadership skills and commitment to excellence needed from the next superintendent in Andover as we promote student achievement and success,” said USD 385 Board President Melinda Fritze. “Brett White shares our vision and is committed  to student achievement, educator effectiveness, operational efficiency and overall excellence. We believe he’s the right person to lead our district into the future.”

White has served as assistant superintendent of schools in Andover since 2012, leading various departments including most recently, human resources. He has led the district’s safety committee and successfully implemented partnerships with the Andover Police Department and enhanced school safety policies. Prior to his role as assistant superintendent, he served as principal at Andover Middle School and led the successful transition into two middle schools when the district split into Andover and Andover Central schools in 2001.

“I am deeply honored and humbled to be selected as the next USD 385 Superintendent,”  said Brett White.  “Andover is an extraordinary district and it has been my privilege to serve in the district for nearly 16 years. I look forward to the opportunity to work with our Board of Education, staff, students, parents and community to build on the foundation of excellence in the Andover District.”

The Board of Education expects to finalize White’s contract in the coming weeks and formally approve the contract during its January 9, 2017 meeting.

White will replace Greg Rasmussen, who informed the Board of Education of his intention to retire Monday. Rasmussen joined USD 385 as superintendent of schools in July 2013 and is credited with creating district-wide operating efficiencies, cultivating student success and building lasting relationships throughout the district and community.

“The Board has worked closely with Brett over the past few years as he dealt with multiple Human Resources and student matters that needed to be addressed by the Board of Education,” Fritze said. “His strength as a leader, an administrator and educator makes him the right choice to continue to build upon the foundation that the district has built under Rasmussen’s leadership. We look forward to working with Brett in his new role as we continue to grow the district and set high expectations for student achievement and success.”

Rasmussen will continue his day-to-day operating responsibilities as superintendent through July 1, 2017. Pending Board of Education approval on a contract for White, the BOE will also begin to work with both Rasmussen and White on a formal transition process.