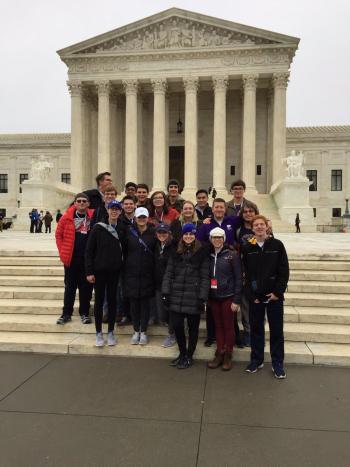 "I think this is a terrific opportunity to expose our students to our nation's institutions, traditions and history beyond the traditional classroom walls," said Mr. Schaefer. "We brought an amazing group of kids who showed genuine interest in learning about and participating in the civic ideals we're called upon to uphold."

Over the course of the five days, students explored such popular sights as the White House, Arlington Cemetery, the National Archives, the Supreme Court, the Library of Congress, George Washington's Mount Vernon estate, Ford's Theater, the sight of President Lincoln's assassination and the Holocaust Museum. Additionally, they visited a number of sites on the National Mall such as the Jefferson, Lincoln, FDR, MLK, Vietnam and Korean War memorials. Students even had the unique opportunity to walk through the new African-American Smithsonian which just opened to the public this past September.

"It truly was a great opportunity. It was awe inspiring to see the Capitol, all the museums and the structures that contain our institutions," senior Cameron Greenfield said.

On Friday, Jan. 20, the students, Mr. Schaefer and assistant principal Amanda Grier waded through the crowds and security to get on the National Mall for the inauguration of President Trump.

"Security was incredibly tight so we were fortunate to get through it and down on the Mall a couple of hours before the ceremony. We had a wonderful view of the proceedings and we were so thankful the weather cooperated with us in that it wasn't so frigid like previous inaugurations," Mr. Schaefer said.

Following the ceremony, students took the time to visit the Air and Space Museum, the Natural History and American History Smithsonian.

For many students, it was the Women's March the day after the presidential inauguration that left an impression on them.

"The most impactful part of the trip was getting to see the Women's March on Washington. I have never seen anything like it and I got to witness a huge part of history, so it's pretty awesome to say that I got to be there," senior Hannah Coggeshall said.

Along with the traditional landmarks, the group was able to experience a little fun with a side trip to see the historical town of Alexandria – where they took part in a ghost tour. They also took in some of the cultural sides of Washington D.C. by exploring Chinatown and riding the Metro. A few students even caught up close sights of Sen. Rand Paul and the Rev. Jesse Jackson.

"I'm so thrilled that we have kids and parents in our community who see the value in experiencing our democratic institutions up close. This trip allows history to come alive and gives the kids a chance to see that our founders intended this to be a participatory society in which we need to have a voice in our nation and its future," Mr. Schaefer said.