When Jaguar and Trojan swimmers splashed into the new Andover Public Schools Aquatics Center in mid-November, they had a place to call home for the first time.

“This is amazing,” says Allison Craig, who coaches the Andover Central High School swim teams. “It was nice swimming at the YMCA, but especially after winning state last year, it’s really exciting for us to actually have a pool, and a place to show off our talents and have home meets.”

The Aquatics Center, attached to the new Andover High School, will quickly get its time to shine as it hosts home meets for both schools and the Ark Valley Chisholm Trail League meet in February. Swimming is a winter sport for boys and a spring sport for girls.

The center features ground-to-ceiling windows on the north side, allowing sunlight to glisten off the clear water.

“It’s so nice because many of the pools around this area feel more like a dungeon because there are no windows,” says Kelsie Biebighauser, who coaches the Andover High School boys team. “The windows are great to add that natural light. It’s a nice pool.”

The center was among the $188 million in facility enhancements approved by voters in May 2017. It is among the final projects to be completed.

Swimmers say they appreciate having their own place to call home.
“It’s really nice because when we come in here, it’s just us,” says AHS senior Carter Champlin. “The water’s crystal clear. No one’s in it. When you get in, it’s your pool.” 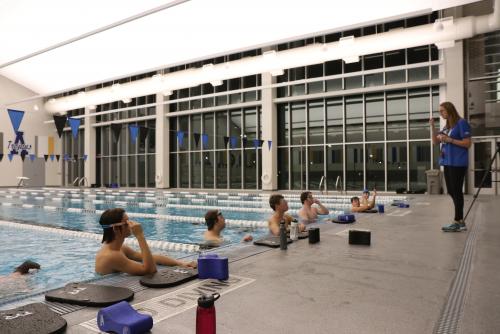 Matt Hurst is the maintenance employee charged with making sure the water stays crystal clear and chemically balanced. He completed a certification course, visited with other pool managers and worked with various contractors to get the pool operational.

Though the chemical system is automatic, Hurst must test the chemical levels every day to ensure safety. He also backwashes the pool filter and vacuums the pool. All of the 287,000 gallons go through the filtration system every six hours.

Though he’s not a swimmer, he takes pride in making sure the facility is in top condition for the high school teams.

“This is my office,” he says. “I mean, I get a giant pool to be around all day and enjoy.”

The symbolism of having both the Jaguar and Trojan logos on the center’s wall — and that the pool represents all of Andover — is not lost on the swimmers.

“Although there is that rivalry there, it’s kind of nice for Andover,” says Ethan Finney, an ACHS sophomore swimmer. “We’re like brothers, right? We have a mutual understanding with each other, and it’s nice to be able to share the pool.”

Crews are nearing the completion of the $188 million in bond-funded construction projects approved by voters in May 2017.

With the completion of the Aquatics Center this fall, the last major remaining bond project is the new District Office. The office, which will house district administration and information technology, is scheduled to open early summer 2022 at 1432 N. Andover Road. It will feature a multipurpose room that will be used for professional learning and Board of Education meetings. The facility, which cost approximately $6 million, will be just under 20,000 square feet.

District Office has been housed in the former Meadowlark Elementary School at 1411 N. Main St. during construction.

Because bond projects thus far have come in under budget, the Board of Education in November was able to to approve an additional $2.4 million in supplemental bond projects. These include upgraded HVAC controls at three schools that will allow systems to operate more efficiently; a remodel of the Family and Consumer Sciences room at ACHS to provide equity with the new facility at AHS; parking lot repairs at Cottonwood Elementary School; and renovations to the gym at Sunflower Elementary, including new windows, flooring and painting.